The ozone depletion caused by human-produced chlorine and bromine compounds is expected to gradually disappear by about the middle of the 21st century as these compounds are slowly removed from the stratosphere by natural processes. This environmental achievement is due to the landmark international agreement to control the production and use of ozone-depleting substances. Full compliance would be required to achieve this expected recovery.

In 1987, the recognition of the potential for chlorine and bromine to destroy stratospheric ozone led to the Montreal Protocol on Substances that Deplete the Ozone Layer, as part of the 1985 Vienna Convention for the Protection of the Ozone Layer, to reduce the global production of ozone-depleting substances. Subsequently, global observations of significant ozone depletion have prompted amendments to strengthen the treaty. The 1990 London Amendment calls for a ban on the production of the most damaging ozone-depleting substances by 2000 in developed countries and 2010 in developing countries. The 1992 Copenhagen Amendment changed the date of the ban to 1996 in developed countries. Further restrictions on ozone-depleting substances have been agreed upon in Vienna (1995) and Montreal (1997).

In contrast, under the current international agreements that are now reducing the human-caused emissions of ozone-depleting gases, the net tropospheric concentrations of chlorine- and bromine-containing compounds started to decrease in 1995. Because 3 to 6 years are required for the mixing from the troposphere to the stratosphere, the stratospheric abundances of chlorine are starting to reach a constant level and will slowly decline thereafter. With full compliance, the international agreements will eventually eliminate most of the emissions of the major ozone-depleting gases. All other things being constant, the ozone layer would be expected to return to a normal state during the middle of the next century. This slow recovery, as compared with the relatively rapid onset of the ozone depletion due to CFC and bromine-containing halon emissions, is related primarily to the time required for natural processes to eliminate the CFCs and halons from the atmosphere. Most of the CFCs and halons have atmospheric residence times of about 50 to several hundred years.

However, the future state of the ozone layer depends on more factors than just the stratospheric concentrations of human-produced chlorine and bromine. It will also be affected to some extent by the changing atmospheric abundances of several other human-influenced constituents, such as methane, nitrous oxide, and sulfate particles, as well as by the changing climate of the Earth. As a result, the ozone layer is unlikely to be identical to the ozone layer that existed prior to the 1980s. Nevertheless, the discovery and characterization of the issue of ozone depletion from chlorine and bromine compounds and a full global compliance with the international regulations on their emissions will have eliminated what would have been, as the figure illustrates, a major deterioration of the Earth's protective ultraviolet shield.

Effect of the International Agreements on Ozone-Depleting Stratospheric Chlorine/Bromine 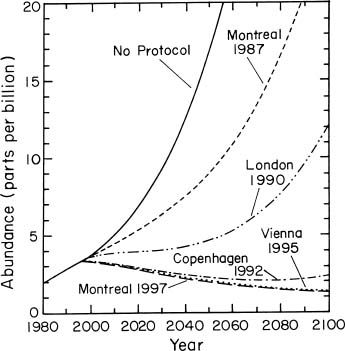