UV Monitoring in the UK

The observed decline in stratospheric ozone concentrations has led to an increasing concern about UV radiation levels at mid- and high latitudes. Exposure to UV has been linked to human health problems including skin cancer, eye disorders and immune suppression. UV has been shown to accelerate the breakdown of both natural and synthetic materials and to harm soils, vegetation and water ecosystems.

High quality ground-based UV measurements are required to determine the climatology and to identify any long-term changes. These data can also be used to validate satellite measurements of surface UV radiation, enabling improved estimates of global and regional UV radiation distributions.

The PHE solar network now has nine sites in the UK:

There are also sites overseas in Ireland, Gibraltar and Cyprus.

At each site, there is one measurement head, with three detectors, all of which are broadband.  The detectors measure: photopic, erythemally effective UV and UVA and data are recorded every five minutes.  The live data collected, together with historic data are available on the UV Index Graphs page of UK-Air.

PHE also carries out spectral solar UV monitoring, both in situ at Chilton and sometimes at temporary sites of interest elsewhere.

Spectral measurements are made at Reading by Manchester University on behalf of the Department of the Environment, Food, and Rural Affairs. Before 2000, scans from 290 to 500 nm with 1 nm steps were made hourly with an Optronic 742 spectroradiometer. Routine spectral data and graphs are available for download from December 1992. Sporadic (clear sky) spectral data are available from the same site from August 1989. Since 2000, the sampling has been increased to 0.5 nm steps at half hourly intervals and the instrument was changed over a period of time to a Bentham DM150.

A Biospherical Instruments GUV-541 multifilter radiometer has been monitoring at Manchester since 1997, run by Dr. Webb. It records 5 minute averages during daylight hours. Ozone measurements began at the same site in Manchester in 2000 with a Brewer Mk III spectroradiometer and the same instrument measures spectral UV from 290-365 nm. 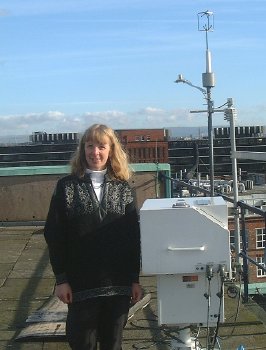