Although there are natural forces that cause fluctuations in ozone amounts, there is no evidence that natural changes are contributing significantly to the observed long-term trend of decreasing ozone.

The formation of stratospheric ozone is initiated by ultraviolet (UV) light coming from the Sun. As a result, the Sun's output affects the rate at which ozone is produced. The Sun's energy release (both as UV light and as charged particles such as electrons and protons) does vary, especially over the well-known 11-year sunspot cycle. Observations over several solar cycles (since the 1960s) show that total global ozone levels vary by 1-2% from the maximum to the minimum of a typical cycle. However, changes in the Sun's output cannot be responsible for the observed long-term changes in ozone, because the ozone downward trends are much larger than 1-2%. As the figure below shows, since 1978 the Sun's energy output has gone through maximum values in about 1980 and 1991 and minimum values in about 1985 and 1996. It is now increasing again toward its next maximum around the year 2002. However, the trend in ozone was downward throughout that time. The ozone trends presented in this and previous international scientific assessments have been obtained by evaluating the long-term changes in ozone after accounting for the solar influence (as has been done in the figure below).

Major, explosive volcanic eruptions can inject material directly into the ozone layer. Observations and model calculations show that volcanic particles cannot on their own deplete ozone. It is only the interaction of human-produced chlorine with particle surfaces that enhances ozone depletion in today's atmosphere.

Specifically, laboratory measurements and observations in the atmosphere have shown that chemical reactions on and within the surface of volcanic particles injected into the lower stratosphere lead to enhanced ozone destruction by increasing the concentration of chemically active forms of chlorine that arise from the human-produced compounds like the chlorofluorocarbons (CFCs). The eruptions of Mt. Agung (1963), Mt. Fuego (1974), El Chichón (1982), and particularly Mt. Pinatubo (1991) are examples. The eruption of Mt. Pinatubo resulted in a 30- to 40-fold increase in the total surface area of particles available for enhancing chemical reactions. The effect of such natural events on the ozone layer is then dependent on the concentration of chlorine-containing molecules and particles available in the stratosphere, in a manner similar to polar stratospheric clouds. Because the particles are removed from the stratosphere in 2 to 5 years, the effect on ozone is only temporary, and such episodes cannot account for observed long-term changes. Observations and calculations indicate that the record-low ozone levels observed in 1992-1993 reflect the importance of the relatively large number of particles produced by the Mt. Pinatubo eruption, coupled with the relatively higher amount of human-produced stratospheric chlorine in the 1990s compared to that at times of earlier volcanic eruptions. 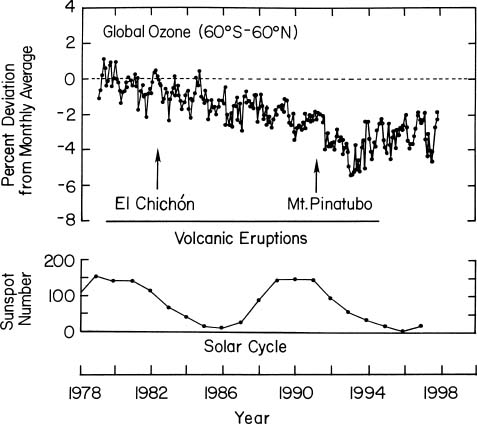