The Sun emits radiation over a wide range of energies, with about 2% in the form of high-energy, ultraviolet (UV) radiation. Some of this UV radiation (UV-B) is especially effective in causing damage to living beings, for example, sunburn, skin cancer, and eye damage to humans. The amount of solar UV radiation received at any particular location on the Earth's surface depends upon the position of the Sun above the horizon, the amount of ozone in the atmosphere, and local cloudiness and pollution. Scientists agree that, in the absence of changes in clouds or pollution, decreases in atmospheric ozone lead to increases in ground-level UV radiation.

The largest decreases in ozone during the past 15 years have been observed over Antarctica, especially during each September and October when the ozone hole forms. During the last several years, simultaneous measurements of UV radiation and total ozone have been made at several Antarctic stations. In the late spring, the biologically damaging ultraviolet radiation in parts of the Antarctic continent can exceed that in San Diego, California, where the Sun is much higher above the horizon.

In areas or the world where smaller ozone depletion has been observed, UV-B increases are more difficult to detect. In particular, detection of trends in UV-B radiation associated with ozone decreases can be further complicated by changes in cloudiness, by local pollution, and by difficulties in keeping the detection instrument in precisely the same operating condition over many years. Prior to the late 1980s, instruments with the necessary accuracy and stability for measurement of small long-term trends in ground-level UV-B were not available. Therefore, the data from urban locations with older, less-specialized instruments provide much less reliable information, especially since simultaneous measure-ments of changes in cloudiness or local pollution are not available. When high-quality measurements have been made in other areas far from major cities and their associated air pollution, decreases in ozone have regularly been accompanied by increases in UV-B. This is shown in the figure below, where clear-skymeasurements performed at six different stations demonstrate that ozone decreases lead to increased UV-B radiation at the surface in amounts that are in good agreement with that expected from calculations (the "model" curve).

Increases in Erythemal (Sunburning) Ultraviolet Radiation Due to Ozone Decreases 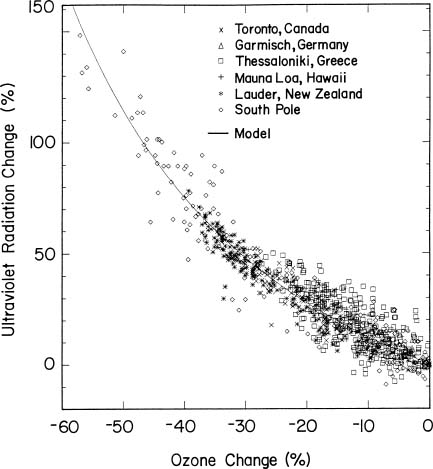