Stratospheric ozone depletion, caused by increasing concentrations of human-produced chemicals, has increased since the 1980s. The springtime loss in Antarctica is the largest depletion. Currently, in nonpolar regions, the ozone layer has been depleted up to several percent compared with that of two decades ago.

As the image below indicates, the magnitude of ozone depletion varies between the regions of the Earth. For example, there has been little or no ozone depletion in the tropics (about 20 degrees north and south of the equator). The magnitude of the depletion also depends on the season. From 1979 to 1997, the observed losses in the amount of ozone overhead have totaled about 5-6% for northern midlatitudes in winter and spring, about 3% for northern midlatitudes in summer and fall, and about 5% year round for southern midlatitudes. Since the early 1980s, the ozone hole has formed over Antarctica during every Southern Hemisphere spring (September to November), in which up to 60% of the total ozone is depleted. Since the early 1990s, ozone depletion has also been observed over the Arctic, with the ozone loss from January through late March typically being 20-25% in most of the recent years. All of these decreases are larger than known long-term natural variations.

The large increase in atmospheric concentrations of human-made chlorine and bromine compounds is responsible for the formation of the Antarctic ozone hole. Furthermore, the overwhelming weight of evidence indicates that those same compounds also play a major role in the ozone depletion in the Arctic and at midlatitudes.

In addition to these long-term changes, transient effects have also been observed in the stratospheric ozone layer following major volcanic eruptions such as Mt. Pinatubo in 1991. During 1992 and 1993, ozone in many locations dropped to record low values. For example, springtime depletions exceeded 20% in some populated northern midlatitude regions, and the levels in the Antarctic ozone hole fell to the lowest values ever recorded. These unusually large, but short-term, ozone decreases of 1992 and 1993 are believed to be related in part to the large amounts of volcanic particles injected into stratosphere, which temporarily increased the ozone depletion caused by human-produced chlorine and bromine compounds, much as polar stratospheric clouds increase these chemicals' effect on ozone depletion in polar regions. Because these particles settle out of the stratosphere within a few years, the ozone concentrations have largely returned to the depleted levels consistent with the downward trend observed before the Mt. Pinatubo eruption. Should a similar eruption occur in the coming decade, ozone losses of the same magnitude might be expected, because the chlorine levels in the stratosphere will still be high. 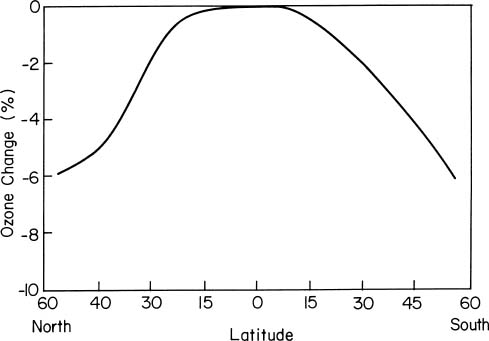