Atmospheric ozone has two effects on the temperature balance of the Earth. It absorbs solar ultraviolet radiation, which heats the stratosphere. It also absorbs infrared radiation emitted by the Earth's surface, effectively trapping heat in the troposphere. Therefore, the climate impact of changes in ozone concentrations varies with the altitude at which these ozone changes occur. The major ozone losses that have been observed in the lower stratosphere due to the human-produced chlorine- and bromine-containing gases have a cooling effect on the Earth's surface. On the other hand, the ozone increases that are estimated to have occurred in the troposphere because of surface-pollution gases have a warming effect on the Earth's surface, thereby contributing to the "greenhouse" effect.

As shown in the figure, the increase in carbon dioxide is the major contributor to climate change. Carbon dioxide concentrations are increasing in the atmosphere primarily as the result of the burning of coal, oil, and natural gas for energy and transportation. The atmospheric abundance of carbon dioxide is currently about 30% above what it was 150 years ago. The relative impacts on climate of various other "greenhouse" gases are also shown on the figure.

There is an additional factor that indirectly links ozone depletion to climate change; namely, many of the same gases that are causing ozone depletion are also contributing to climate change. These gases, such as the chlorofluorocarbons (CFCs), are greenhouse gases, absorbing some of the infrared radiation emitted by the Earth's surface, thereby effectively heating the Earth's surface.

Conversely, changes in the climate of the Earth could affect the behavior of the ozone layer, because ozone is influenced by changes in the meteorological conditions and by changes in the atmospheric composition that could result from climate change. The major issue is that the stratosphere will most probably cool in response to climate change, therefore preserving over a longer time period the conditions that promote chlorine-caused ozone depletion in the lower stratosphere, particularly in polar regions. At present, the amplitude and extent of such a cooling, and therefore the delay in the recovery of the ozone layer, still have to be assessed.

The image below shows the relative importance of the changes in the abundance of various gases in the atmosphere. 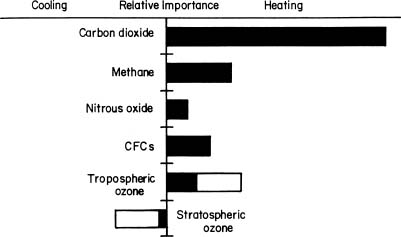