Most of the Chlorine in the Stratosphere comes from human sources

Most of the chlorine in the stratosphere is there as a result of human activities, as the figure below illustrates.

Many compounds containing chlorine are released at the ground. Those that dissolve in water cannot reach stratospheric altitudes in significant amounts because they are "washed out" of the atmosphere in rain or snow. For example, large quantities of chlorine are released from evaporated ocean spray as sea salt (sodium chloride) particles. However, because sea salt dissolves in water, this chlorine is taken up quickly in clouds or in ice, snow, or rain droplets and does not reach the stratosphere. Another ground-level source of chlorine is from its use in swimming pools and as household bleach. When released, this chlorine is rapidly converted to forms that dissolve in water and therefore are removed from the lower atmosphere. Such chlorine never reaches the stratosphere in significant amounts. Volcanoes can emit large quantities of hydrogen chloride, but this gas is rapidly converted to hydrochloric acid, which dissolves in rain water, ice, and snow and does not reach the stratosphere. Even in explosive volcanic plumes that rise high in the atmosphere, nearly all of the hydrogen chloride is removed by precipitation before reaching stratospheric altitudes. Finally, although the exhaust from the Space Shuttle and from some rockets does inject some chlorine directly into the stratosphere, the quantities are very small (less than 1% of the annual input from halocarbons in the present stratosphere).

In contrast, the major ozone-depleting human-produced halocarbons --such as chlorofluorocarbons (CFCs) and carbon tetrachloride (CCl4)-- do not disolve in water, do not react with snow or other natural surfaces, and are not broken down chemically in the lower atmosphere. Therefore, these and other human-produced substances containing chlorine do reach the stratosphere.

Several pieces of evidence combine to establish human-produced halocarbons as the primary source of stratospheric chlorine. First, measurements have shown that the chlorinated species that rise to the stratosphere are primarily manufactured compounds [mainly CFCs, carbon tetrachloride, methyl chloroform, and the hydrochlorofluorocarbon (HCFC) substitutes for CFCs], together with small amounts of hydrochloric acid (HCl) and methyl chloride (CH3Cl), which are partly natural in origin. Second, researchers have measured nearly all known gases containing chlorine in the stratosphere. They have found that the emissions of the human-produced halocarbons, plus the much smaller contribution from natural sources, could account for all of the stratospheric chlorine. Third, the increase in total stratospheric chlorine measured between 1980 and 1998 corresponds to the known increases in concentrations of human-produced halocarbons during that time.

Primary Sources of Chlorine Entering the Stratosphere in the Early 1990s 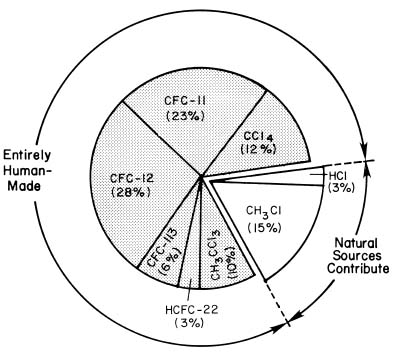