CFCs reach the stratosphere because the Earth's atmosphere is always in motion and mixes the chemicals added into it.

CFC molecules are indeed several times heavier than air. Nevertheless, thousands of measurements from balloons, aircraft, and satellites demonstrate that the CFCs are actually present in the stratosphere. This is because winds and other air motions mix the atmosphere to altitudes far above the top of the stratosphere much faster than molecules can settle according to their weight. Gases such as CFCs that do not dissolve in water and that are relatively unreactive in the lower atmosphere are mixed relatively quickly and therefore reach the stratosphere regardless of their weight.

Measured changes in the concentration of constituents versus altitude teach us more about the fate of compounds in the atmosphere. For example, the two gases carbon tetrafluoride (CF4, produced mainly as a by-product of the manufacture of aluminum) and CFC-11 (CCl3F, used in a variety of human activities) are both heavier than air.

Carbon tetrafluoride is completely unreactive at altitudes up to at least 50 kilometers in the atmosphere. Measurements show it to be nearly uniformly distributed throughout the atmosphere (as illustrated in the figure below, the abundance of CF4 is nearly the same at all altitudes where measurements have been made). There have been measurements over the past two decades of several other completely unreactive gases, both lighter than air (neon) and heavier than air (argon and krypton), that show that they also mix upward through the stratosphere regardless of their weight.

CFC-11 is unreactive in the lower atmosphere (below about 15 kilometers) and is similarly uniformly mixed there, as shown in the figure. However, the abundance of CFC-11 decreases as the gas reaches higher altitudes, because it is broken down by high-energy solar ultraviolet radiation. Chlorine released from this breakdown of CFC-11 and other CFCs remains in the stratosphere for several years, where every chlorine atom destroys many thousands of molecules of ozone.

Atmospheric Measurements of CFC-11 and CF4 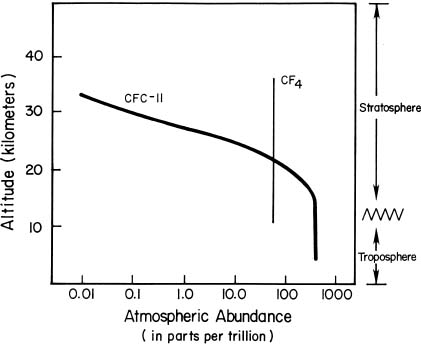