Ozone hole over the Arctic

Significant reductions in ozone content in the stratosphere above the Arctic have been observed during the late winter and early spring (January-March) in 6 of the last 9 years. However, these reductions, typically 20-25%, are much smaller than those observed currently each spring over the Antarctic (the ozone hole).

The difference between ozone content in the two polar regions (see figure below) is caused by dissimilar weather patterns. The Antarctic continent is a very large land mass surrounded by oceans. This symmetrical condition produces very low stratospheric temperatures within a meteorologically isolated region, the so-called polar vortex, which extends from about 65oS to the pole. The cold temperatures lead in turn to the formation of clouds, known as polar stratospheric clouds. These clouds provide surfaces that promote production of forms of chlorine and bromine that are chemically active and can rapidly destroy ozone. The conditions that maintain elevated levels of chemically active chlorine and bromine persist into September and October in Antarctica, when sunlight returns over the region to initiate ozone depletion.

The winter meteorological conditions in the Northern Hemisphere, just like in the Southern Hemisphere, lead to the formation of an isolated region bounded by strong winds, in which the temperature is also cold enough for polar stratospheric clouds to form. However, the geographic symmetry about the North Pole is less than about the South Pole. As a result, large-scale weather systems disturb the wind flow, making it less stable over the Arctic region than over the Antarctic continent. These disturbances prevent the temperature in the Arctic stratosphere from being as cold as in the Antarctic stratosphere, and fewer polar stratospheric clouds are therefore formed. Nevertheless, chemically active chlorine and bromine compounds are also formed over the Arctic, as they are over Antarctica, from reactions at the surface of the clouds. But the cold conditions rarely persist into March, when sufficient sunlight is available to initiate large ozone depletion.

In recent years, there has been a string of unusually cold winters in the Arctic, compared with those in the preceding 30 years. The cold and persistent conditions have led to enhanced ozone depletion, because the atmospheric concentrations of ozone-depleting gases have also been relatively large during these years. However, the cause of the observed change in meteorological conditions is not yet understood. Such conditions might persist over the coming years, further enhancing ozone depletion. But it is also possible that, in the next few years, they could revert to conditions characteristic of a decade ago. In the latter case, chemical ozone depletion in the Arctic would be expected to diminish.

Therefore, although there has been significant ozone depletion in the Arctic in recent years, it is difficult to predict what may lie ahead, because the future climate of the Arctic stratosphere cannot be predicted with confidence. 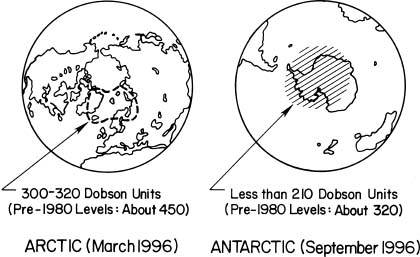