Appearance of an Ozone Hole over Antarctica explained

The Earth's atmosphere is continuously stirred over the globe by winds. As a result, ozone-depleting gases get mixed throughout the atmosphere, including Antarctica, regardless of where they are emitted. The special meteorological conditions in Antarctica cause these gases to be more effective there in depleting ozone compared to anywhere else.

Human emissions of chlorofluorocarbons (CFCs) and halons (bromine-containing gases) have occurred mainly in the Northern Hemisphere. About 90% have been released in the latitudes corresponding to Europe, Russia, Japan, and North America. Gases such as CFCs and halons, which are insoluble in water and relatively unreactive, are mixed within a year or two throughout the lower atmosphere. The CFCs and halons in this well-mixed air rise from the lower atmosphere into the stratosphere mainly in tropical latitudes. Winds then move this air polewardboth north and south from the tropics, so that air throughout the global stratosphere contains nearly equal amounts of chlorine and bromine.

In the Southern Hemisphere, the South Pole is part of avery large land mass (Antarctica) that is completely surrounded by ocean. This symmetry is reflected in the meteorological conditions that allow the formation in winter of a very cold region in the stratosphere over the Antarctic continent, isolated by a band of strong winds circulating around the edge of that region. The very low stratospheric temperatures lead to the formation of clouds (polar stratospheric clouds) that are responsible for chemical changes that promote production of chemically active chlorine and bromine. This chlorine and bromine activation then leads to rapid ozone loss when sunlight returns to Antarctica in September and October of each year, which then results in the Antarctic ozone hole. As the figure below depicts, the magnitude of the ozone loss has generally grown through the 1980s as the amount of human-produced ozone-depleting compounds has grown in the atmosphere.

Similar conditions do not exist over the Arctic. The wintertime temperatures in the Arctic stratosphere are not persistently low for as many weeks as over Antarctica, which results in correspondingly less ozone depletion in the Arctic (see the next question).

Schematic of the Growth of the Antarctic Ozone Hole 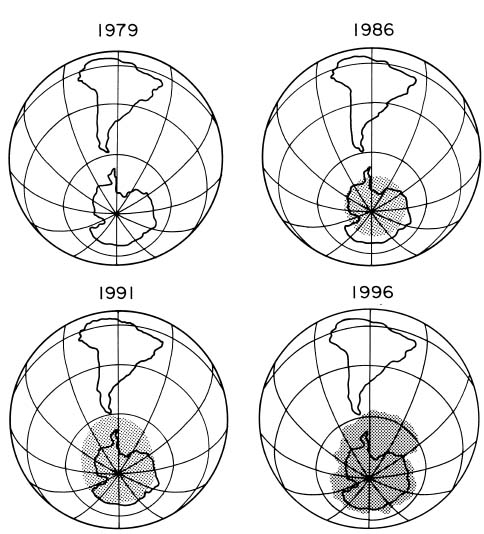